Wait, is this a comedy anime or not?

Welcome to Nanba prison, the most brightly coloured and glittery prison you will ever see, it’s also impossible to escape from. Now I know that claim has been made a thousand times before, but these guards mean it, there’s death traps galore and those guards I mentioned are superhuman monsters (Seriously, someone call Dragonball Z, see if they’re missing a couple of fighters). Of course that doesn’t stop people from trying to escape, like Jyugo, he’s always trying to escape (some say it’s the only thing he’s good at). He’s never quite made it yet, but that’s not going to stop him. In the mean time we’ve got some wacky antics with the rest of the inmates, until Jyugo’s past starts to catch up with him that is.

Okay, I think I’m going to have to tackle this review a little differently to normal. Perplexed has probably been my main emotion throughout watching this series, which has been to its advance as it’s meant I’ve stuck around just to find out what actually happens. As a marketing ploy it works, though it’s not one that I think could work all the time. This anime seems to have been a miracle mix of randomness to create something unique and ludicrous on every level. Anyway, on with the review.

This is a strange anime and not just because it tries to portray a prison as somewhere bright, colourful and, well, camp (seriously what’s with all the sparkles all over the place?). No, what really makes this anime register on the weird-o-meter is the fact that it tries to be two different things and yet by some bizarre Frankenstein-level miracle of non-science, it manages to live.

Now, like myself, you may be under the misapprehension that this is a gag anime, the first few episodes certainly give that impression. I mean they trundle along with sort little sketches and deliver a good couple of punch lines before moving on to the next. It was fun, though I have to admit that it was probably the strange setting that kept me around more than anything else, mainly to see where exactly they were taking this.

Then the New Year’s tournament rolled around and things started to change. Things started playing out like a tournament arc in a shonen anime, which was a bit odd but had decent jokes as the cast poked fun at several tropes while at the same coming up with some ludicrous challenges for the matches in the tournament. Then all of sudden this serious edge started to creep into proceedings as we approached the final match. I mean one minute they’re being silly daydreaming about what they’re going to ask for if they win, the next a prisoner is throwing fireballs and trying to kill Jyugo.

I kept waiting for the punch line and one never came. They were actually doing a death match and there was actually a sense of danger about it, mostly because I had no idea where this was going to go. I mean this is a gag anime right? (Even the announcer guard agrees with me and across the series makes a couple of good jokes around how this really doesn’t fit). This wasn’t a one off thing either. After the tournament all the episodes have this shroud of seriousness lurking around the edges, while still at the same time continuing its wacky comedy sketches. One minute they’ll making a joke about an inmate or guard, the next we have Jyugo in a cell dealing with the consequences of his actions and lamenting his dark past.

Yeah, Jyugo has a back story and it’s not just a punch line, in a comedy anime! Actually when I think about it a fair few of the characters get decent back stories, especially towards the end. I mean some of them are silly, like the ninja kidnapped by an actress and pushed into showbiz just so he could play an authentic ninja on the big screen. Then on the other hand we have the martial arts student who was sold off by his master just so that said master could save his own hide. The weirdest part? Both of them kind of get to me. These characters all started out as two-dimensional jokes and while I doubt they’ll ever have deep characterisations, I care about these guys, this anime has slowly sucked me in and made in invested in their plots.

I mean true, some of this stuff does feel like it came out of nowhere, especially Jyugo’s arc where at the start (during the comedy section) he seems like a perfectly normal protagonist. He’s appears normal, expect for the shackles around his wrists, ankles and neck and clearly his motivation is to get said shackles off (as well as find the person that put them on him). Then after the tournament arc there’s all this stuff about how Jyugo is empty inside with no desires of this own and this arc then becomes about finding himself and what he really wants (outside of getting the shackles off and finding the man who put them on him). It does feel a little out of left field, like it was only thought of after the writer decided to go for this more serious route.

This anime really shouldn’t work, and in some places it doesn’t. Sometimes the flicking between gag humour and fight scenes doesn’t work, sometimes it does. It’s hard to do drama when you’re sat there expecting a punch line. I’m not saying drama should be all serious, all the time, it certainly shouldn’t. There needs to be a balance between light and dark, but if you go too far one way then it upsets this balance, and sometimes this anime does. On the other hand this anime has me hooked, despite whatever flaws it has, I want to see exactly where it’s going (which may or may not have something to do with the fact that Season 2 ends right in the middle of a serious arc as everyone is gearing up to fight the big bad! Give me Season 3 damn it!)

Nanbaka is a strange mix of gag comedy and shonen action that really shouldn’t work and sometimes it doesn’t. It struggles at times to find the balance between its comedy and serious moments. It doesn’t help that some of the characters are either 2-dimensional or have back-stories that come out of nowhere. Still, when it manages to get it right then it’s a pretty decent anime. I like the characters and the plot has me intrigued, which is certainly more than I was expecting from this anime. 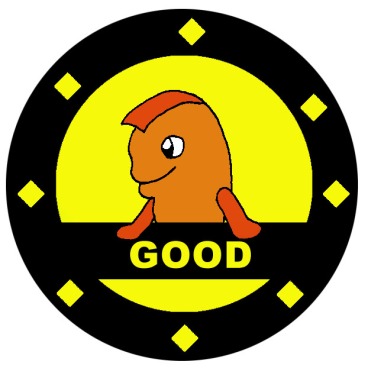